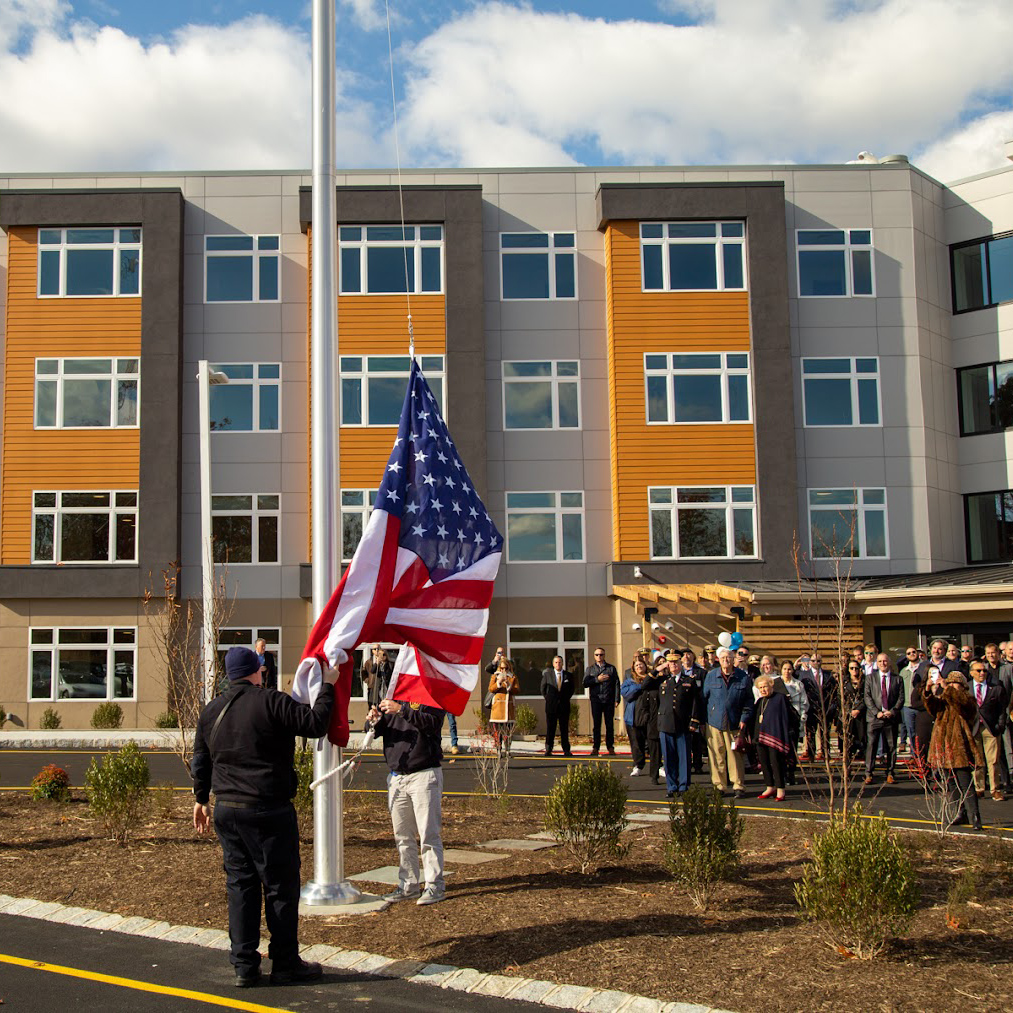 TINTON FALLS, NJ (November 19, 2021) – After 14 months of construction, a 70-unit apartment community for military veterans, including those transitioning from homelessness, will open here next month as one of the first private veterans’ communities in the U.S. to offer rental housing to former service members at a range of incomes along with comprehensive services, including a program to help move veterans toward homeownership.

Federal, state, county, and local officials gathered today at the Gordon H. Mansfield Veterans Community to celebrate the December opening of the $23 million, mixed-income property with apartments for veterans earning between 30 and 80 percent of Area Median Income (AMI). Developed by WinnCompanies and the non-profit, Soldier On, the community’s unique features include: 18 apartments available at middle-income rents of up to 80% of Area Median Income (AMI), unusual because most veteran’ communities only serve low-income households.

The higher-income tier creates homes for those with service-connected disability compensation that would disqualify them from traditional affordable housing; A separate wing and dedicated laundry and gathering space for female veterans, offering them greater privacy; Free supportive programs that include telehealth, homeownership guidance, credit counseling, legal and telehealth services; on-site peer support; case management to assist residents with transportation, mental and physical health issues, employment opportunities, and access to Veterans Administration benefits and community resources; and, A columbarium and an eternal flame located near the back patio for the respectful internment of the ashes of veteran residents who wish to be interred on site after they pass away.

“The fact that this community is 80 percent leased weeks before it opens underscores the pressing need to help former service members who are searching for affordable, supportive housing,” said WinnCompanies CEO Gilbert Winn. “Too many veterans struggle with housing affordability, especially those who served after 9/11. They can’t afford to live in the cities they volunteered to defend. Thanks to the expertise of Solider On and united support from public officials and agencies, we are taking a small but important step to address a very big challenge.”

“Soldier On is thrilled to see the completion of this project after years of effort and support from a number of individuals, agencies, and elected officials,” said Soldier On CEO Bruce Buckley, whose organization has served homeless veterans since 1994. “The Gordon H. Mansfield Veterans Community will house, and most importantly, offer a multitude of services and supports for 70 U.S. military veterans. Soldier On is grateful to all who helped make this a reality. It took a village to create a village.”

In addition to 18 middle-income apartments, the community includes deeply affordable units with 18 available to veterans earning up to 30 percent of AMI and 24 at up to 50 percent of AMI. All 70 apartments feature a fully furnished, fully stocked kitchen, dining space, living room, bedroom, and a private bath. Utilities, cable, and wi-fi service is included in rent. All units are one bedroom.

“For the first time in decades, many veterans will finally have a suitable place to live, hope, and prosper in Monmouth County thanks to the world-class housing opportunities and vital services provided by Soldier On,” said U.S. Rep. Chris Smith, whose landmark 2001 law for homeless veterans first authorized funding for the U.S. Dept. of Housing and Urban Development-Veteran Affairs Supported Housing (HUD-VASH) program. “Through my law, the federal government is rightfully assisting in this life-changing project as the HUD-VASH program will be tapped as a major source of rental assistance funding for veterans who will be living at the new Monmouth County housing complex,” Smith added.

“We owe the people who have served our nation a high-quality place to call home and we won’t stop supporting these projects until we no longer hear the words ‘homeless’ and ‘veteran’ uttered in the same sentence,” said Lt. Governor Sheila Oliver, who serves as DCA Commissioner and NJHMFA board chair. “Governor Murphy and I are proud to work with WinnCompanies, Solider On, and the other public and private partners on this endeavor to provide New Jersey veterans a safe and affordable place to live that meets their unique needs and gives them the care and support they deserve.”

The Borough of Tinton Falls donated the 12-acre wooded parcel on which the community was built. "We are thrilled that Soldier On is here in our town of Tinton Falls. This project represents the way our veterans deserve to be treated, with honor and respect for their service to our country,” Borough Council members said in a statement.

State Senator Vin Gopal (D-Monmouth) said he is “very excited” to see Mansfield Veterans Community finally become a reality. “As Chair of the Military and Veterans’ Affairs Committee, I’m grateful for this apartment complex setting aside one-bedroom apartments for homeless veterans in our community. The transition from military service to civilian life can be very difficult, but the economic downturn caused by the public health crisis has made it even harder for our veterans to find jobs and put a roof over their family’s heads." The apartment complex encompasses a token of gratitude towards those who have served this great nation,” Sen. Gopal said.

One of the veterans who will be moving into the Mansfield Veterans Community is Phillip Moffett, 63, a peer support specialist for Solider On who served 12 years in the Army, including the 82nd Airborne Division. “It means a lot to me and the New Jersey Soldier On a team that I am moving into this new community,” Moffett said. “As the building’s live-in resident assistant, I will work with the on-site management team and primarily respond to any after-hours, weekend, or holiday emergencies that may occur.”

“With an early commitment and lens toward sustainable design, the project has resulted in an environmentally and socially sustainable community,” said Christina McPike, Director of Energy and Sustainability for WinnCompanies. “The use of healthy materials and elimination of in-unit gas combustion not only benefits the environment, but also ensures long-term durability, comfort, and health for building residents and occupants – a key project objective considering the residents who will call this community home.”

“New Jersey Housing and Mortgage Finance Agency are glad to have contributed to this successful project. With average housing costs for renters in the area reaching almost $1,900 per month, the need for affordable rental housing in Tinton Falls is clear,” said NJHMFA Chief Financial Officer John M. Murray. “The Gordon H. Mansfield Veterans Community represents an important step in providing quality affordable housing to New Jersey’s veterans who have provided their service, sacrifice, and dedication to our country.”

"Bank of America is proud to team up with WinnCompanies, NJHMFA, and NJCDA to help bring 70 units of much-needed affordable and supportive housing for veterans to Monmouth County,” said Todd Gomez, Bank of America’s North Region Market Executive for Community Development Banking. “The impact of providing safe, stable housing options will help make a lasting difference in the lives of our most vulnerable residents.”

The community is named for the late Gordon H. Mansfield, a highly decorated Vietnam War veteran who served as Deputy Secretary of Veterans Affairs, as well as Assistant Secretary for Fair Housing and Equality Opportunity at the Department of Housing & Urban Development. During his military service, Mansfield earned the Distinguished Service Cross, the Bronze Star, three Purple Hearts, the Combat Infantryman Badge, and the Presidential Unit Citation.

Monmouth County Commissioner Lillian G. Burry, an early proponent of the project, said: “Today, we take one small but very tangible step in doing our duty by providing an opportunity for those who have bravely served and sacrificed for us all to have a chance for a better life. It is one way to acknowledge that ours is an abiding obligation and one that we proudly meet. This is just one more way that we can honor the patriotism of our brothers and sisters, fathers and mothers who have served in the name of freedom and to tangibly tell them they will never be forgotten.”

The Gordon H. Mansfield Veterans Community is Soldier On’s seventh housing facility for veterans and its first- ever supportive services housing development in New Jersey, where it already manages several programs for veterans. The non-profit also works with veteran communities in Massachusetts, New York, and Pennsylvania. It is WinnCompanies’ second veterans-focused development. In 2020, the company partnered with Brighton Marine, a non-profit veteran support network, to complete The Residences at Brighton Marine, a mixed-income community in Boston with 102 units of veteran’s preference housing. Soldier On delivers supportive services and case management at a 25-unit permanent housing facility on the Brighton Marine campus.

“I am incredibly proud that WinnCompanies was able to partner with Soldier On to make the tremendous Gordon H. Mansfield Veterans Community a reality,” said WinnDevelopment Senior Vice President David Ginsberg. “The impact this building and its integrated support services will have on the lives of deserving veteran men and women is a testament to Gordon Mansfield’s distinguished legacy. With the support of the State of New Jersey and our financing partners, we believe this will become a replicable model to create vital, permanent housing for veterans in need.”

WinnResidential, the property management arm of WinnCompanies, will manage the community in collaboration with Soldier On. WinnResidential now manages 16 multifamily properties totaling 1,995 apartments in 11 New Jersey cities and towns. Its sister company, WinnResidential Military Housing Services, manages 41,000 homes for members of the U.S. Armed Forces and their families at military installations in 12 states.