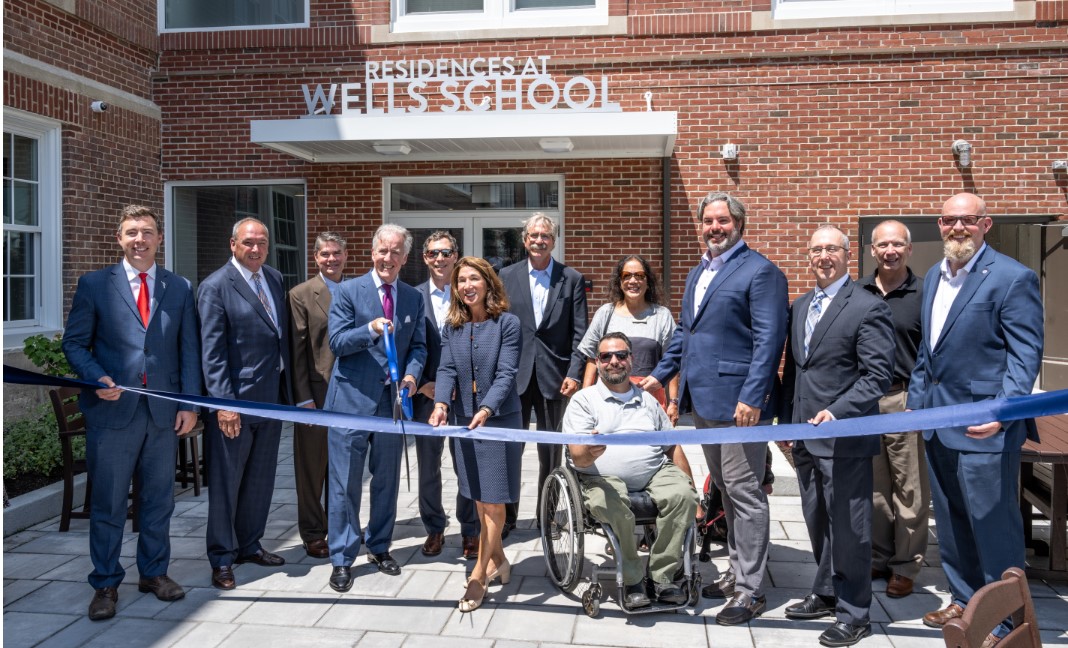 Congressman Richard Neal, Massachusetts Lt. Gov. Karyn Polito, and numerous state and local leaders joined Arch Communities Principal Richard Relich and WinnDevelopment President Managing Partner Larry Curtis in Southbridge to cut the ribbon for The Residences at Wells School. Of the 62 apartments, 56 provide affordable housing at rents set at 60 percent of Area Median Income (AMI), including eight apartments reserved for residents at or below 30 percent of the AMI. Six apartments have been customized for handicapped and sensory-impaired households.

“I have long been a champion of the Low Income Housing Tax Credit and the Historic Tax Credit – two important tools that were utilized here in Southbridge,” said Congressman Richard E. Neal, Chair of the House Committee on Ways and Means. “The successes of these incentives should serve as a model for developing tax tools designed to provide a direct benefit to the communities that are often left behind. When we help communities provide housing, we help community members thrive.”

“The fact that The Residences at Wells School is already almost 100 percent occupied vividly demonstrates the need for safe, quality, affordable housing for active seniors in this region,” said Relich. “I hope this development prompts other communities in the area to consider opportunities to replicate the success we’ve experienced here.”

“As a developer, there’s nothing more fulfilling than restoring a historic landmark and returning it to service for a good case,” said WinnDevelopment Executive Vice President Adam Stein. “Everywhere we work, we find situations where seniors cannot afford to stay in their community. This effort is a small step toward addressing a much larger need.”

“As the State Senator for Southbridge, I am thrilled to see new development in the town,” said State Sen. Ryan Fattman. “The fact that these residences are largely occupied already shows the need for such projects that provide affordable housing for seniors. I hope to see more developments like this in the future and in other parts of my district as well.”

"I want to thank and congratulate all those who were instrumental in seeing this important project to fruition,” State Rep. Peter Durant said. "The quality of life and the affordability aspect of this project will help seniors enjoy their golden years in the community they love.”

"We are excited to have this project come to Southbridge. Not only does this project breathe new life into a historic school that has been an important fixture in the community over a hundred years, it affords our seniors an opportunity to downsize and remain in the community they call home,” said Southbridge Town Manager Michael McCall. “Additionally, we see the project as the beginning of a revitalization initiative that will spur further economic development and yield economic benefits to our community."

“The Mary E. Wells High School and later Junior High School were formerly the cornerstone of our educational system here in the Town of Southbridge. I am so proud to see it once again be used to serve our great community providing a safe and much needed housing for our seniors,” said Southbridge Town Councilor David Adams.

“Bank of America is committed to the goal of creating affordable housing. Helping to build safe, affordable housing – in this case, by transforming a vacant school building into a thriving community for senior residents in the town of Southbridge – is a visible demonstration of our support for the communities where we live and work,” said Ed Shea, President, Bank of America Central Massachusetts.

The three-story, 90,000-square-foot building served as a school for a century but had been vacant for eight years before construction began in 2020. It was built in 1916 as Southbridge’s first public high school and was converted to a junior high school in the 1960s.

The school was named for Mary E. Wells, the wife of the co-founder of the American Optical Company, an eyewear manufacturer that was once the region’s largest employer. Ms. Wells became the first woman elected to public office in Southbridge when voters chose her to serve on the town’s Board of Education in the 1890s.

“We have a long history of supporting Winn and Arch Communities,” said Clark Ziegler, executive director of the Massachusetts Housing Partnership (MHP). “Preserving historic schools and mills isn’t easy, but these developers have demonstrated time and again that they are up to the task, and we are proud to be providing long- term financing that will create affordable homes for seniors and continue to honor the name of the first woman to be elected to public office in town.”

Nominated for the National Historic Register in March 2017, the property is located in downtown Southbridge, a central Massachusetts town along the Connecticut border. Local transportation, services, shopping and amenities are within walking distance from the property. The site is also within close proximity to Harrington Hospital and the public bus route.

Adaptive reuse techniques preserved the historic features of the building, which was designed by Peabody and Stearns, one of the premier architectural firms in the eastern United States during the late 19th and early 20th century. It is among the nearly four dozen historic adaptive reuse projects that WinnDevelopment has completed in five states and the District of Columbia. No other residential developer in the United States has won more awards for transforming vacant schools, mills and other historic buildings into multifamily housing.

The project has been designed to achieve the Enterprise Green Communities certification – the leading U.S. standard for the design, construction, and operation of healthy, energy efficient and environmentally responsible affordable housing. Keith Construction serve as the general contractor and The Architectural Team served as the architect.

WinnCompanies is an award-winning, national owner, developer and manager of high-impact affordable, middle income, mixed-income, market rate and military housing communities. Founded in Boston in 1971 and supported by 3,600 team members in 23 states and the District of Columbia, WinnCompanies is one of the nation’s leading multi- family housing managers with 103,000 residential and military apartment homes under management. It is a leading

manager of affordable housing and privatized U.S. military housing in the United States. The company owns 120 apartment communities in 11 states and the District of Columbia.