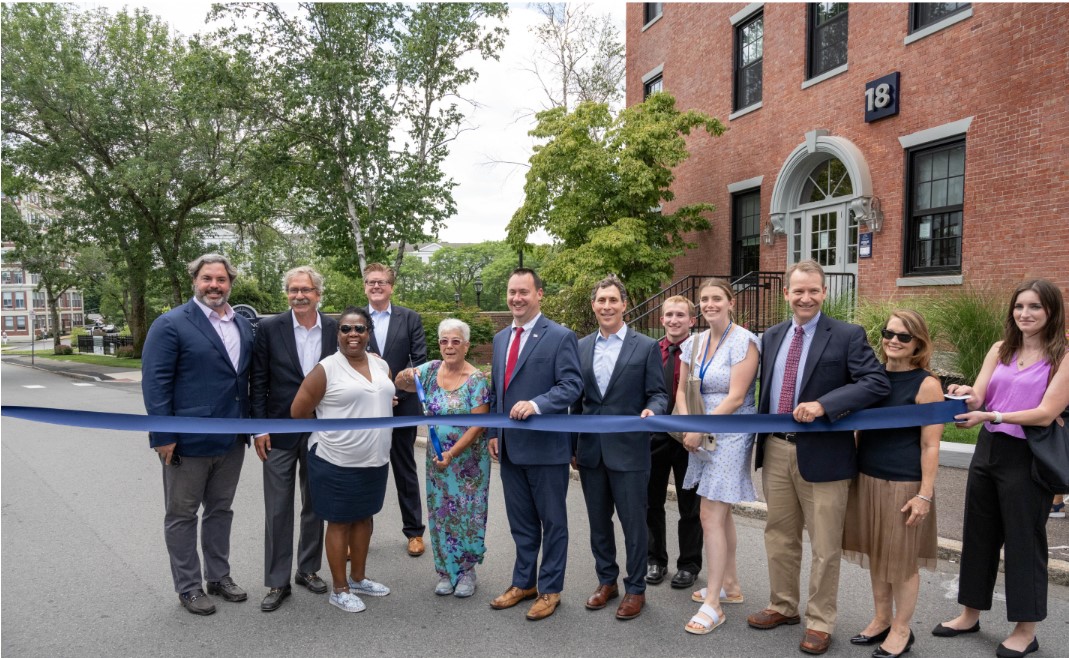 The ribbon-cutting ceremony at The Tannery, now renamed Preserve North, culminates an effort that began in the fall of 2018 when Massachusetts housing officials asked WinnCompanies to try to acquire the four-building complex to prevent it from being sold to a market rate developer as deed-restricted affordability protections for its residents expired.

"It was a great honor for us to have the chance to protect and dramatically improve a property that holds a critical position in the history of Peabody and in the community’s affordable housing inventory,” said Larry Curtis, president and managing partner of WinnDevelopment. “The development team deserves great credit for successfully managing and completing this complex occupied rehabilitation during the brunt of the pandemic.”

With the community’s 235 units of affordable housing on the verge of converting to market rate apartments in 2018, the Massachusetts Executive Office of Housing and Economic Development exercised its power under state law to designate an affordable housing developer to purchase the property if it could match the market rate offer.

At the state’s request, WinnCompanies agreed to pursue the property in October 2018 and, thanks to financing from MassHousing, the state’s quasi-public affordable housing authority, purchased it in July 2019 in a transaction that extended the community’s affordability provisions for a minimum of 45 years.

“This is a terrific outcome for the lower-income residents of Preserve North, who will continue to be able to live affordably in downtown Peabody in a completely renovated building with some added amenities,” said MassHousing Executive Director Chrystal Kornegay. “Everyone involved in this transaction was committed to making sure that The Tannery property did not convert to market rates and remained a long-term source of affordable housing in Peabody.”

Thirty-five (35) apartments are restricted to households earning less than 30% of Area Median Income (AMI), 165 units are reserved for households at or below 60% of AMI; and 35 apartments are set aside for income-averaging rents at below 80% of AMI.

“The sale of the Tannery to WinnCompanies has enabled many lower-income Peabody residents to remain in their homes and continue to be part of our community. It also secured a significant portion of Peabody’s affordable housing stock for decades to come,” said Peabody Mayor Ted Bettencourt. “The agreement to save the Tannery represents a remarkable team effort. Working together with my administration, the City Council, members of our state legislative delegation, and DHCD, WinnDevelopment proved to be exceptional partners.”

In addition, the rehabilitation increased the number of ADA-compliant apartments from 14 to 22, creating 15 units for mobility-impaired residents and seven (7) the sensory impaired.

"Massachusetts residents are in critical need of affordable housing options,” said State Sen. Joan B. Lovely. “Preserve North has preserved 235 affordable units to our housing stock where individuals and families can continue to live in downtown Peabody. This development pays homage to our city’s past. Once the epicenter of Peabody’s leather industry, this facility carries forth the legacy of helping preserve and enhance the longevity and future of Peabody residents. I would like to thank the City of Peabody, WinnDevelopment, MassHousing, and the Massachusetts Executive Office of Housing and Economic Development for their leadership and work to make this project a reality.”

WinnCompanies also paid for the repairs of a collapsing dam and retaining wall on the property, which were later conveyed To the City of Peabody.

“This project has been one of the finest examples of a successful public/private partnership. With the assistance of state and municipal financing, Winn Development has rejuvenated this housing development and brought the Crowninshield property into the 21st century,” said State Rep. Thomas P. Walsh. “Its residents are the beneficiaries of this collaboration. I am grateful to WinnDevelopment, the Commonwealth of Massachusetts and the City of Peabody for making this happen.”

“The need for more affordable housing is a priority in Massachusetts. We are committed to providing financing solutions here in Peabody and elsewhere that help achieve this important housing goal. Making our communities stronger, healthier, and more inclusive is key to building a sustainable economy,” said Miceal Chamberlain, President, Bank of America Massachusetts.

Built in the late 1800s by Arthur C. Lawrence as an industrial leather tanning facility, the property is a decaying 225- foot brick chimney, which was taken down to 15 feet and converted into a memorial recognizing the site’s critical role in fueling Peabody’s industrial growth during the early 20th century.

“Peabody’s leather history is a truly American story – one of ingenuity, hard work and community. The AC Lawrence Memorial honors the memory of the immigrants who settled here to work,” said Deborah Eskenazi, vice chairperson of the Peabody Historical Commission. “We would like to thank WinnCompanies for working with us and Mayor Bettencourt to create a lasting tribute to the men and woman that dedicated their lives to the Leather Industry and the development of our City of Peabody.”

Resident services, including an on-site food pantry for residents and meals for school-aged youths, are provided through WinnResidential’s Connected Communities platform through partnerships with local community organizations.

WinnCompanies is an award-winning, national owner, developer and manager of high-impact affordable, middle income, mixed-income, market rate and military housing communities. Founded in Boston in 1971 and supported by 3,600 team members in 23 states and the District of Columbia, WinnCompanies is one of the nation’s leading multi-family housing managers with 103,000 residential and military apartment homes under management. It is a leading manager of affordable housing and privatized U.S. military housing in the United States. The company owns 120 apartment communities in 11 states and the District of Columbia.